Deepblue Worlds Inc. has created the Dino On My Desk Virtual Dinosaur Kit.

Playtime, and knowledge-time has now been combined in a beautiful new package. Kids can get more out of the virtual dinosaur experience by combining the physical products and the virtual products the kit offers.  Books, cards, board, and app makes the Virtual Dinosaur Kit special as a truly valuable ensemble for dino lovers worldwide. 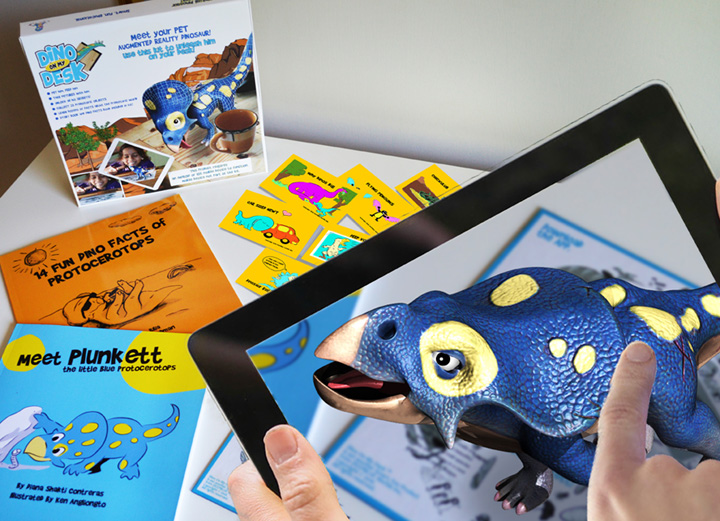 The main item in the kit is an Augmented Reality (AR) platform on which Plunkett, the little blue protocerotops appears when seen through a mobile device.  Users can download the free app on Google Play store, and Apple App store on their mobile devices, point to the Augmented Reality platform, and watch as Plunkett the protocerotops gets transported from the late cretaceous era of the earths history, to our times.

Playtime, and knowledge-time has now been combined in a beautiful new package.

The user can tickle, pet, take pictures (including selfies!), collect hidden virtual prehistoric objects, feed, and build a unique relationship with the curious and mischievous little animal from the cretaceous era.

The app features various secrets that can be unlocked, that each give glimpses into life in the era of the dinosaurs. This, combined with the dozens of facts that are built into the app, makes Dino On My Desk uniquely educational, while being an innovative use of Augmented Reality technology for kids. 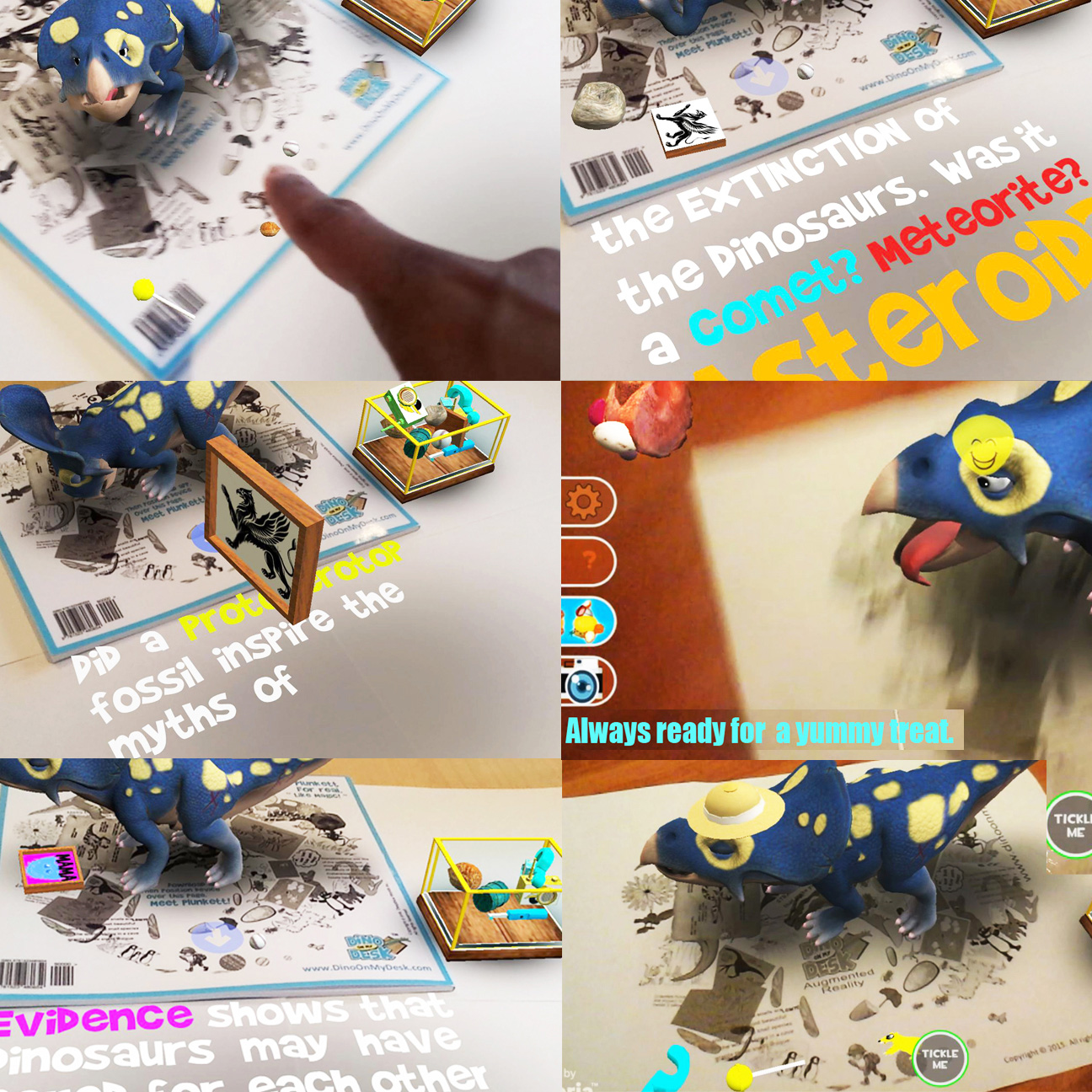 The Dino On My Desk Virtual Dinosaur Kit comes with a beautifully illustrated and written storybook by Diana Shakti Contreras, ‘Meet Plunkett, the little blue protocerotops’. It is illustrated by Ken Angliongto, a game developer/cartoonist, and long-time collaborator of Deepblue Worlds.

The kit also comes with an engaging manual on this particular species of dinosaur, ’14 Fun Dino Facts on protocerotops’. It is written by fictional dinosaur expert and explorer, ‘Xplorer Julia’.

Finally, to cap it all off, the Dino On My Desk Virtual Dinosaur Kit also comes with an attractive deck of 25 poker sized cards, ‘Dino Facts’. Each card has an engagingly written blurb, and a colorful cartoon (also by Ken Angliongto) exposing a dinosaur, or nature fact. 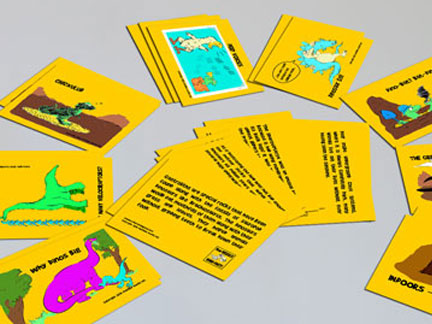 ‘Our goal is that a child playing with our kit becomes a real mini-expert on protocerotops, and its ecosystem’, says Sunil Thankamushy, the creator of the product.

The Dino On My Desk Virtual Dinosaur Kit is available now in our Giftshop. 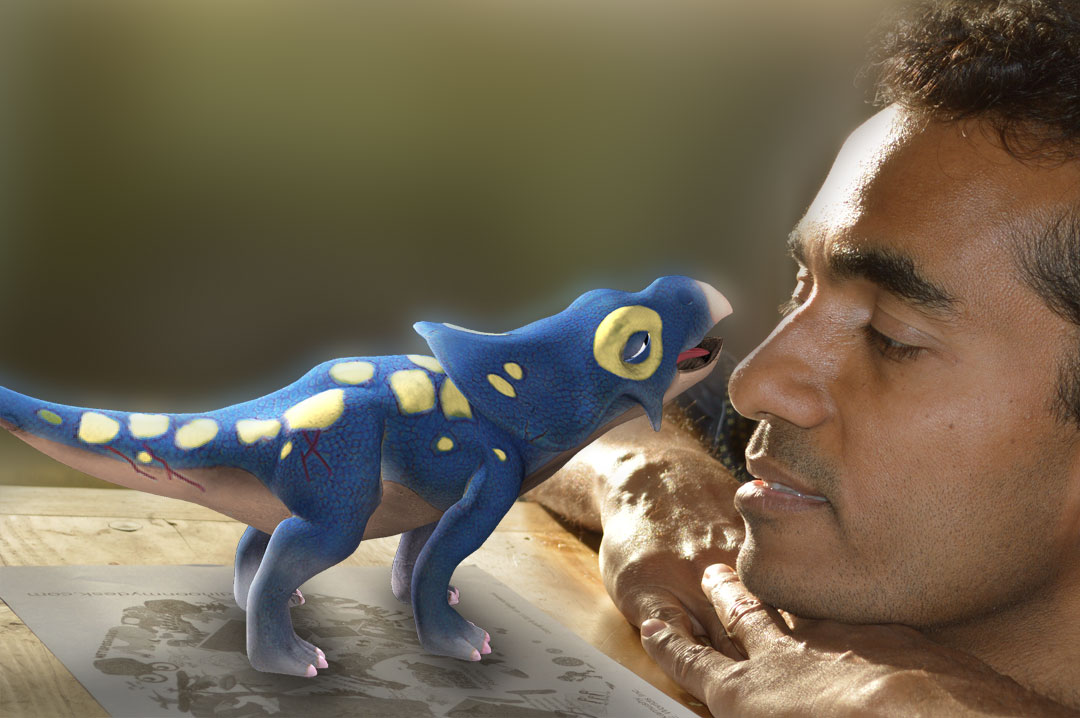 The best way to learn about something new is to experience it: whether you are taking up a second language or learning a new sport, you will always get the best results by practically engaging with the subject. What a shame that we cannot have the same experiences with history. Imagine the lessons our children could learn from being able to fully interact with a family of pioneers or walk the streets of Ancient Greece. Well thanks to recent advances in technology, these ideas are close to becoming reality: Augmented Reality (AR).

“I wanted to make sure that every minute spent with the virtual animal was educational to children in some way.” _Sunil

AR works by superimposing digital images over the real world, enriching the landscape when viewed through your tablet or mobile phone. It works in one of two ways: your device can physically project graphics onto any object, or the extra information will appear on your screen, overlaid on top of what your camera sees. Since AR first appeared on the marketplace in the mid 00’s, it has found uses in many sectors; military,business, software and, of course, the gaming industry. Extra information is encoded into pictures which can be read by programs installed on a device. These programs then turn the information into animations and videos which play out onscreen. Anything is possible; from animated baseball cards which show their players hitting home runs, to play-mats which generate scores of pixelated alien invaders for you to shoot with your finger. And now the developers at DeepBlue Worlds Inc, designers of the informative science website Xplore Pangaea (TM), have harnessed this cutting edge technology to create an app that lets you learn about life in the late Cretaceous period by interacting with one of its more playful inhabitants. Plunkett, a blue and yellow protoceratops, is the titular character from Dino On My Desk (TM), and he is gaining popularity as a must-have pet for inquisitive children and adults everywhere.

Plunkett reacts to your touch, and you can interact with him by tickling him, petting him and feeding him from a selection of delicious and nutritious prehistoric desserts. For any child – or grown up – who ever watched The Flintstones and wished for their own pet dinosaur, this really is a dream come true. There are many other ‘virtual pet’apps on the market, but Dino On My Desk (TM) stands out from the crowd because of the care that has been taken to ensure the game contains an accurate, educational aspect; one that is delivered with charming humor and pitched perfectly for kids. This is down to the strong beliefs of the game’s designer, and DeepBlue World Inc’s founder, Sunil Thankamushy. 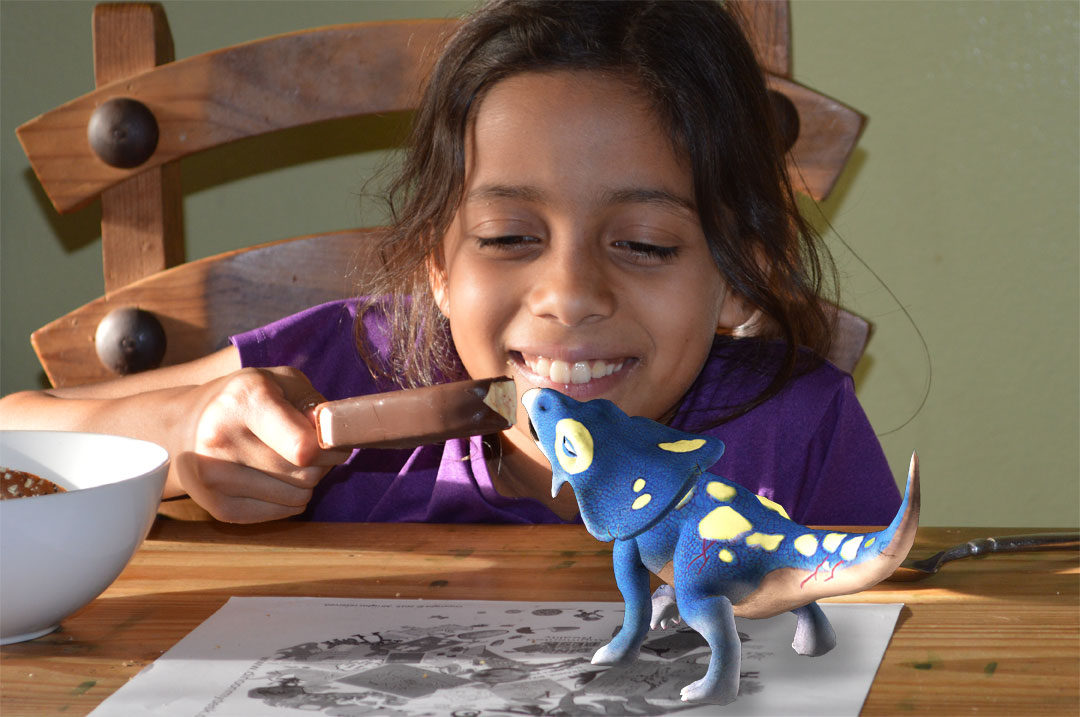 The app allows users to take photos with the dinosaur

Sunil has been working in the gaming industry for over 16 years, and has worked on big name brands like Call of Duty: Finest Hour and Medal of Honor. However, as he grew older and his life changed, he felt the ‘call of duty’ down a different path. “When my children were born, my life’s direction became clear: I decided to build products that nurture the sense of wonder, inspire curiosity and foster the imagination” says Sunil, who grew up in the Indian countryside, a typical young boy filled with the urge to explore and a sense of adventure; something he now wants to foster within the next generation. He left the world of high-adrenaline gaming, recruited a team of dedicated, like-minded individuals, and together they set about designing innovative, imaginative and educational games aimed at the younger end of the marketplace.

Tickle Plunkett and he will burp

Dino On My Desk (TM) is the first of DeepBlue World Inc’s educational games, and it’s a stunningly created and ambitious entry into the Google Play Store catalogue. Plunkett looks gorgeous; his design is flawless, the little sounds he utters are adorable, and his actions and reactions are so realistic you will check behind your tablet more than once just to make sure he isn’t really there. But what makes the app truly exceptional is the learning that takes place, almost subconsciously as you play. Sunil explains: “I wanted to make sure that every minute spent with the virtual animal was educational to children in some way. So nearly every interaction with the animal brings to light some information about its prehistoric time.”

The type of collectible objects varies randomly between the mundane and the mysterious. From raptor claws and ginkgo leaves, to rocks and … a toothbrush?!

And these lessons are perfectly delivered with childish humor: tickle Plunkett and he will burp. His burps open portals back to his native time from which spew a number of objects connected to the flora and fauna of the late Cretaceous. You are provided with a virtual box in which to collect these objects…that is if Plunkett doesn’t try to eat them first. Each object is accompanied by a snippet of narration giving you further insight into the plucky protoceratops’ world. And all of this is so wonderfully scripted that the learning doesn’t feel forced at all.

The type of collectible objects varies randomly between the mundane and the mysterious. From raptor claws and ginkgo leaves, to rocks and … a toothbrush?! There is enough variety here to keep a child entertained for hours and brimming with anticipation at the thought of what will be next to fall out of the portal. Even the food available in the app for you to feed your dinosaur is largely historically accurate. Ok, so you would never have seen a real dinosaur munching on a plate of Mezo Maqui or rustling up some Triassic Rolls, but the ingredients used, with a bit of creative licence, were all growing in the late Cretaceous period and all eaten by the protoceratops. The team at DeepBlue Worlds Inc have thoroughly researched their subject material with the same passion that they have put into designing the aesthetics of their app.

In an age where vapid, time-wasting games take up a large percentage of the mobile gaming market and parents worry that their children are wasting their lives, socially isolated in front of luminescent screens, it is genuinely refreshing to find that there are people out there using innovative technology for noble means. Children will love Plunkett because he is novel, he is funny and he has that wow factor so often missing from modern, commercial apps. Parents will love him because he stimulates and educates and although he may not be entirely real, the love and care that went into crafting and researching him, is. 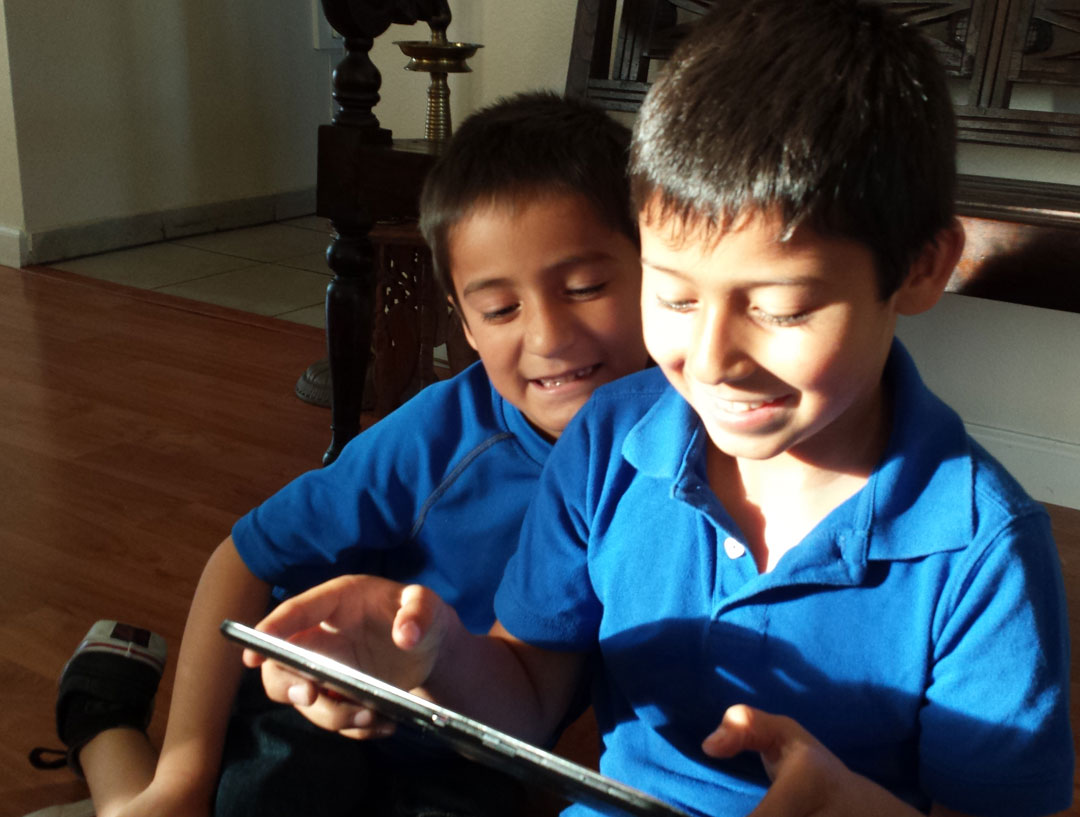 You may purchase the kit here: Giftshop